In a previous article, we explained how to send commands to the robot. In this article, we will explain how to use the monitoring port to get information about the robot and display them on a LabVIEW front panel.

The robot sends information to the monitoring port at a fixed rate. The default delay is 15ms but can be changed using the command SetMonitoringInterval(n). The information sent to the port is:

Again, every message sent by the robot ends with the ASCII null character \x00.

To get the status of the robot from the monitoring messages, some string handling is required. The big challenge here is that the messages are not of fixed length and the TCPRead doesn’t allow searching for a specific end of line character. The strategy to extract the messages and contents is: 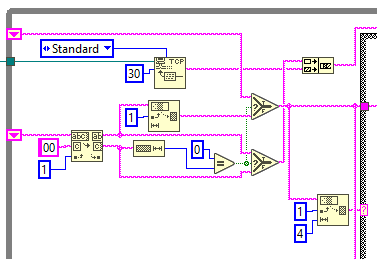 This section might look a bit complicated but this is because some LabVIEW functions behave in a very specific way and we need to add some blocks to make it work the way we want.

This section corresponds to the steps 2-4 described earlier where we read the TCP port and extract the message. 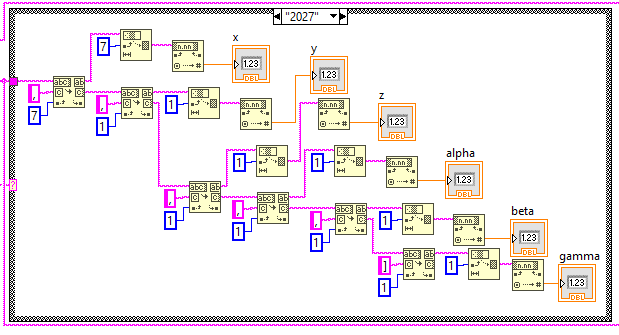 The message parsing is fairly simple as it is a cascade of search functions and data conversion functions. For each code number, we parse the message the same way but with different outputs. We also add an empty "Default" case for the codes that we don't want to manage.

Monitoring the Meca500 robot on labview can be useful when creating most front panels. For instance if a jogging panel needs to be created, the monitoring is very useful to know if we approach the limits of the joints for instance. It can be a bit difficult to create since the string handling in LabVIEW is not the easiest thing to do, but as shown in this example, it is doable with a little bit of work.