The Meca500 robot communicates primarily through TCP/IP communication. LabVIEW supports this type of communication and is fairly easy to use. The user simply has to build the messages and send them through the TCP write block function.

The Meca500 robot can receive commands in the form of:

The list of commands can be found in the programming manuals available on the Mecademic Support site. The “\x00” at the end is the null ascii character that is used to signal to the robot that the command has ended.

Some commands return a value when the movement is complete, others can be immediate such as with a status request.

The robot also has a monitoring port that sends info about the robot at a fixed rate. This port can be used to monitor various things on the robot such as the joint pose, end effector pose, and robot status.

Details can be found in the programming manual.

Depending on the type of application, the user might want to queue commands or send them only when needed. Both are possible with the Meca500.

In LabVIEW, there are TCP/IP communication blocks that enable simple communication. They can be found in the Data Communication >> Protocols >> TCP section of the function palette.

The main functions are:

A typical way to use these functions is to first open a connection to the robot. The default IP address is 192.168.0.100 and the control port is 10000. Then, with either a loop or a sequence, the write function is called to send commands to the robot. The write and read functions can be called as many times as needed once the connection has been opened.

For convenience, some subVIs have been created by us to facilitate the use of the Meca500 in LabVIEW. These subVIs can be used to send commands to the robot but do not monitor for a response. The subVIs are:

These 4 subVIs can be used to create almost any program and can be modified if the user wants to add some functionalities. These subVIs always take as an input a TCP Connection, which is output from the TCP Open Connection block, and a Boolean input which serves as a trigger to send the command.

The custom command subVI simply allows the user to send any command that can be found in the programming manual. It simply concatenates the command with the \x00 ending and sends it through the TCP Write block.

These three commands take into inputs either a joint or TCP pose depending on the block. They simply take the inputs and add them to a string with the proper command and format and send them through the TCP Write block.

The user can create their own subVIs for any command required. The only requirement is to follow the formatting from the Programming Guide. 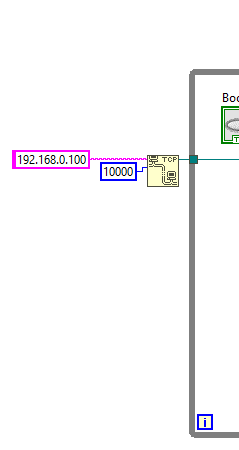 The while loop is there to keep the connection alive until the user ends the program.

Inside the while loop, we have a case structure for when the button is pressed. This sequence structure is there for better readability and could be omitted. 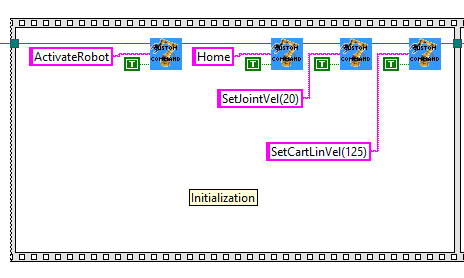 The first section of the sequence is the setup. Note that in the program, I use the CustomCommand subVI to send all my commands to the robot. First we activate and home the robot. These commands are necessary after booting up the robot so it is a good idea to always include them at the start of any program. If the robot is already activated and homed, these commands will be ignored by the robot so they can be repeated without causing any issue.

Then we set the joint and cartesian velocities. It is also a good idea to set the accelerations or any other global setting like blending or limits here before moving the robot. These settings can also be changed in the middle of a program if required.

The other section of the sequence contains the movements of the robot. Here we again use the CustomCommand subVI because these points are fixed and it is therefore simple to use the string command. We could have also used the MoveLin and MovePose subVIs but these are better suited for when you need to send the same command multiple times with positions that change every time. For instance, applications that use vision might be better suited for these subVIs.

Finally we added a time delay. This is necessary because if the communication breaks the robot stops moving. Note that this program works completely asynchronously and there is no feedback from the robot.